Are internet dialects a thing? Mike Rugnetta of Idea Channel explores the idea a bit.  Are they a thing? Absolutely. So what kind of internet dialect do I have? Based on my use of hashtags, word shortenings, acronyms, gifs, memes, I probably fit under the umbrella of “American millennial internet dialect”. But beyond that I (and everyone else on the internet), have a unique dialect (filled with irony, humor,sarcasm and melancholy among other things) that fits into several different sub-(internet) dialects. As with real life on the internet we’re all influenced by a bevy things (real life, other users, other web content), that when infused with our own thoughts and personalities shapes our (internet) dialect. Additionally different mediums have different effects on my language/communication patterns. My personal style of communication can vary depending if I’m using Twitter, blogging, SMS or other mediums. All of them reflect my vernacular as a whole but each mediums brings out a different variation. My preferences of the way I consume content also varies with each passing medium.

My Twitter usage is a unique aspect a suppose of my social media identity. My consumption of the site is mostly related to following news (with a focus on sports news), but I also enjoy following some friends, humor, and the personal lives of certain celebrities amongst other things. My twitter output ranges widely from general opinions, to interactions with friends, to melancholic and or random thoughts to pop culture references, political thoughts, sports stats and things I find of interest dispersed mostly in text, but I also mix in visuals. Twitter is an interesting medium as user are constantly revealing their values in different ways. Sometimes very direct, other times very passively and often unknowingly (myself included) we reveal a lot about ourselves  to our friends and strangers on the internet. 140 characters probably does not consistently bring out the best in anyone, but I’ll tweet on aware and accepting of that fact.

ESPN Fantasy is another online speech community I enjoy. It’s mostly on the consumption end, for sake of taking in information i find value in. Statistics as well as infographics and articles can be found. Different authors on the sight convey different tones when they write for instance Matthew Berry mixes in anecdotes,analogies and humor while supplying good information. I also play my own personal fantasy league on the site and the fantasy league itself is a unique online community. My interactions within it are almost strictly businesslike (everything I do within the league has an angle to the competitive well being of my team. My identity in this community is far less varied than my Twitter identity, but that’s by design 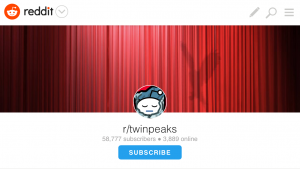 Reddit is a online speech community I find interesting for exploration. Again here I pretty much exclusively observe and consume. I find it interesting seeing people’s theories on things like TV shows. Or curiously looking up random discussions/stories on subjects such as what kind of dreams people in comas have. Its avery exploratory medium, that contains endless subjects and melds texts, opinions, visuals.humor and seriousness at differing points.

One thought on “Online Identities Come with Their Own Vernacular”